Can your soil have too much organic matter?

Five years I was asked to help investigate problems on a farm where the son had taken over a few years before and had been moving away from a plough-based system into organic manure applications, a minimum tillage regimen, and was considering cover crops.

He appreciated that the organic matter content of the soil had been denuded and volatilised into the atmosphere over the previous decades of ploughing. So, liberal (legal rates) applications of fold yard manure and poultry litter had been applied from relatively local sources.

In the investigated field we clarified the farmer moniker of ‘it’s only light land’ to the classification of Sandy Loam soil (some areas improved slightly to Sandy Silt Loam).

Sandy Loam soil is typified by being fast draining; relatively free working; have reasonable water retention; a stable structure; and few physical problems but prone to ‘capping’ in dry weather.

‘Light soil’ that is recreationally ploughed and without receiving any organic manure applications will have been functioning as a ‘grow bag’ for many years. As a consequence, any silt and clay that the soil will have contained will have been lost through Granular Segregation. So, any yield will have to be bought through increased inorganic fertiliser applications. 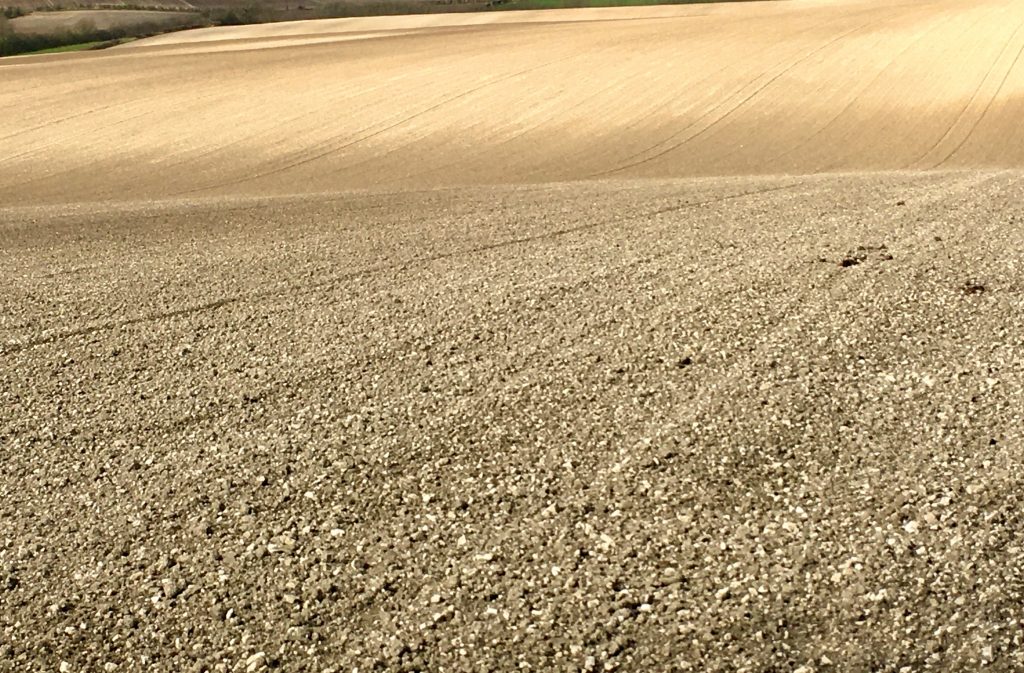 Granular Segregation – the miniscule particles of productive silt and clay are lost through the soil profile by gravity due to excess cultivation, and unproductive chalk / sand / clod is brought to the surface.

Just to remind you how easy it is to ‘kill’ soil productivity by overworking it so that the productive silt and clay are lost for generations – Granular Segregation. 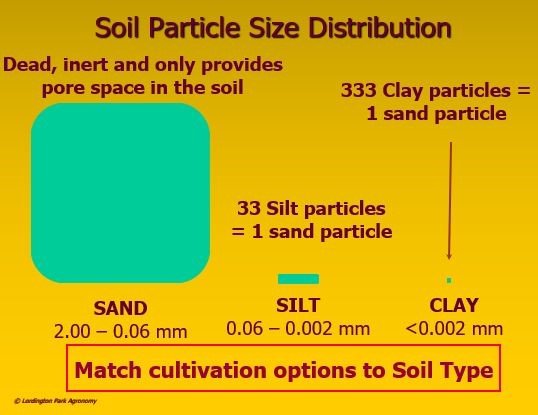 Soil organic matter content was previously measured on this farm in 1998 at an unproductive 0.72% (LOI). With the prevailing farm practices, levels would only have decreased since then.

There are two methods of analysing the soil organic matter content, Loss of Ignition (LOI) and Dumas.

Loss of Ignition (LOI) tends to be more unreliable as if the soil has a high calcium content that will be burnt along with the carbon, potentially skewing the results.

The Dumas test is a laboratory standard methodology for assessing soil organic matter content and therefore results can be directly compared and contrasted.

Recent classification results (aggregated) from across the field are below. Organic Matter was assessed with the Dumas test and shows great potential for future productivity that has been judiciously created by thought and application. 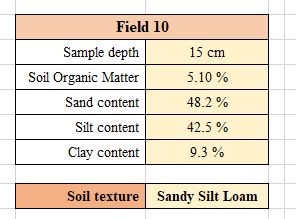 The initial problem affecting productivity on the farm was that high volumes of carbon (e.g., straw that is not broken down / rotted by weather and microbes) were applied but soil was so broken that there was not enough nitrogen, the food of bacteria and fungi, available to encourage the microbes to decompose the carbon. The microbes and bacteria would have to consume soil and consequently generate a ‘soil available nitrogen’ deficiency for the growing crop that will adversely affect crop yield.

If we examine the ideal carbon to nitrogen (C:N) ratio in the soil, the microbe’s ideal is 24:1. Higher than that and the carbon breaks down more slowly, lower that that and the speed of breakdown increases. Though standard farmyard manure analysis ratios are 20:1 the initial rate of manure application, and therefore degradation for crop use, was too high for the soil type and condition to function.

The industry guideline for the soil carbon to nitrogen (C:N) ratio for a crop to function is 10:1.

Analysis from the investigated field this year showed an impressive soil C:N ratio of 9.97. It would have been interesting to have comparative C:N analyses from the 1998 soil sample,

In line with some of the reported Agriculture Bill objectives I have been extrapolating data to assess the level of carbon dioxide that a particular soil can retain – capture. This is calculated from relating the Bulk Density of the soil, to the organic matter content, and assuming that a hectare of soil to 15 cm of soil weighs 2200 tonnes. Also, that there is 58 per cent carbon in the organic matter and that contains 44g of carbon dioxide in each 12g of carbon.

‘Standard value’ Bulk Density at a depth of 15cm is 1.3. This is in turn based on the Bulk Density of silica, which is 2.65, rather than the more accurate ‘Calculated value’ (above) which relates to the actual soil mineral composition detailed on page two.